Dr. Bernstein is engaged in a wide variety of research projects as described below. 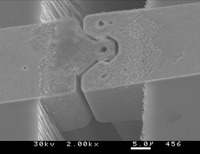 Bernstein is co-inventor (with Patrick Fay, Wolfgang Porod, and Qing Liu) of a chip-to-chip interconnect method called “Quilt Packaging,” in which small metal nodules protruding from the edges of chips allow them to communicate with ultrawide bandwidth and low power. This ongoing work has led to world record interconnect bandwidth, with less than 1 dB of insertion loss as demonstrated up to 220 GHz. Bernstein is co-founder of Indiana Integrated Circuits, LLC, a Notre Dame spin-off company whose mission is to commercialize this exciting new technology. See www.indianaic.com. 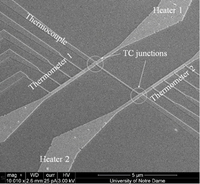 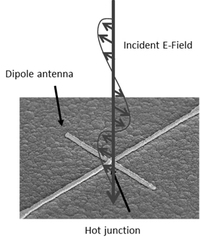 Along with Porod, Alexei Orlov, and Gergo Szakmany, Bernstein is involved in the materials and fabrication aspects of nanoantennas for infrared imaging. In this project, antennas are fabricated along with integrated nanothermocouples. The nanoantennas are designed to “receive” infrared radiation. In our devices, IR light is resonant with the submicron antennas, and the resulting current maximum heats a nanofabricated thermocouple. Our thermocouples come in two flavors, namely the conventional bimetallic variety, and also our novel “mono-metallic” thermocouples that are fabricated from a single piece of lithographically defined metal. Our novel structures contain a size discontinuity, and the differing electron scattering rates in two sections of different widths cause a difference in the Seebeck coefficients, so a nanothermocouple results from only that single metal layer. Considerable advancements have been made in this area, and progress continues.

Bernstein directs the fabrication and materials related aspects of Nanomagnet Logic (NML) (along with Porod, Michael Niemier and Sharon Hu), which is a variation of the quantum-dot cellular automata (QCA) approach, as applied to nanomagnets. One advantage of nanomagnets is that they are well-behaved at room temperature, and it is straightforward to demonstrate NML operation of logic gates and more-complicated arrangements. 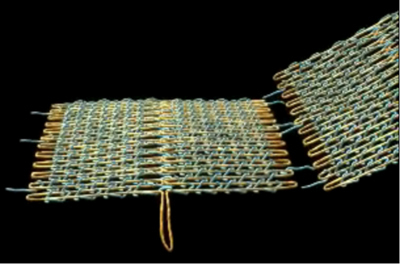 In collaboration with Marya Lieberman from the Department of Chemistry and Biochemistry, Bernstein explores the self-assembly of DNA origami to use in nanopatterning. The DNA origami are synthesized in Lieberman’s group, and Bernstein’s group is responsible for creating nanopatterns on smooth surfaces to which the origami self-assemble and organize. The goal of this project is to develop directed self-assembly of complex electronic arrangements for computing.