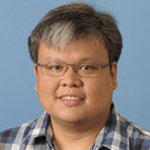 Hadrian is a Ph.D. student with interests in nanomagnetics and nanoelectronics. Prior to enrolling at Notre Dame, he worked as an instructor at the Electrical and Electronics Engineering Institute at the University of the Philippines. He holds an M.S. in computer and systems engineering from Rensselaer Polytechnic Institute and a B.S. in computer engineering from the University of the Philippines.