South Bend Tribune, Mar. 2016: Indiana Integrated Circuits, a technology firm based at Innovation Park at Notre Dame, announced this week that it has closed a round of investment with a group of national private and institutional investors. More.

EE Journal, Mar. 2015: Indiana Integrated Circuits (IIC) believes they have a viable alternative to vertical packaging: it’s a better way to stay horizontal by literally soldering the component dice together into what can function, mechanically, as a single heterogeneous die. They call it “quilt packaging.” More.

Notre Dame, Dec. 2014: Indiana Integrated Circuits, LLC (IIC), an Innovation Park-based company that was co-founded by Notre Dame faculty and researchers, has recently been awarded the highly coveted, $150,000 Elevator Pitch Prize from the MEMS (Microelectromechanical Systems) Industry Group. The prize is directed toward fabrication and prototyping services to be provided by MEMs foundry Rogue Valley Microdevices of Medford, Oregon. More 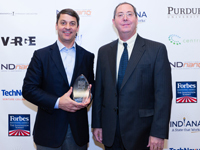 South Bend Tribune, Nov. 2014: A company based at Innovation Park at Notre Dame has developed a process that could make waves in the electronics industry. More

Notre Dame, Oct. 2011: Reflecting its worldwide leadership in the search for new computing technologies, the University of Notre Dame has received two of 12 prestigious grants for cutting-edge nanoelectronics research that were awarded recently by the Semiconductor Research Corporation’s Nanoelectronics Research Initiative (SRC-NRI) and the National Science Foundation. More

Notre Dame, Apr. 2011: The Midwest Institute for Nanoelectronics Discovery (MIND) has received a contract extension for another two years. Led by the University of Notre Dame, MIND is a research consortium designed to discover and develop the next nanoscale logic device. More 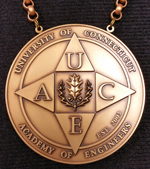 University of Connecticut, Mar. 2011: The UConn School of Engineering celebrated the accomplishments of 11 alumni and friends during a gala awards banquet. | More

Notre Dame, Nov. 2010: Magnets are already being used in memory and data storage, but the Notre Dame team’s research demonstrates that nanomagnets can be used for logic functions. More

Notre Dame, Mar. 2008: Research at the center is set to begin later this year by a team of university professors, students, and researchers, as well as engineers and other professionals from sponsor companies and organizations. More

Notre Dame, Jan. 2006: A paper published by a team of University of Notre Dame researchers in the January 13 edition of the journal Science reveals the demonstration of logic in a magnetic system, thereby opening the door to all-magnetic information processing systems. More

Notre Dame, Nov. 2005: The world’s largest technical professional society, the IEEE is composed of more than 365,000 members who focus on advancing the theory and practice of electrical, electronics and computer engineering. More